skip to main | skip to sidebar

wordpress
Posted by touran at 4:39 PM No comments:

Everything is half done.

I committed to intswemodo2010 on Ravelry, basically 12 sweaters/tops/vests in 12 months. My first sweater is a beautiful lace number which is taking a very long time. To take a break, I cast on this: Pattern: Shirtwaist Pullover by Teva Durham
Yarn: Tahki Yarns Sky in Leaf
The yarn worked out perfectly weight wise, although the color is a little light for my skin. I get darker in the summer, so it'll look better then. I just have to figure what to wear with it. It's too short in the body for my jeans, so I'll need a skirt that sits at the waist. Time for a fabric diving expedition in my closet of shame. I can't visualise what colors (other than white or brown or purple) would go well with this. I probably have prints that would suit, but they're mostly floral and I think that'll look twee.
It's so relaxing to have a quick project that I've put a stop to stashing fingering yarns. I've got enough of that weight to last quite a few years worth of knitting.
On the sewing front, I meant to review a LBD. But the dress is so wrinkled looking in the photos, I'm too embarrassed to show it. Back to the ironing board.
Too make up for lack of sewing, I've resorted to classic make-up stashing:

These are from Lucy's Fabrics: one of the prints is for my son (guess which one!) and the others are just basic cotton lycra knits. The gold one is a brushed knit, slightly beefier and would make a great dress or spring time hoodie. This set is from Fashion Fabrics Club: quilted outerwear from Patagonia and a super wide Japanese wool/lycra knit. The last one had some beautiful colors that sold out in a flash. I missed out on a gorgeous deep rust and the black. Boo.
I've got some pyjamas and workout pants that just need hemming and I can share more of my glamorous life.
Posted by touran at 4:42 PM 1 comment: Every year, I pick a new skill to try. Some work out better than other. Five years ago, I started crocheting, which led me back to knitting. Today, I have two stashes in which I can be buried. Six years ago, it was Italian. I can barely say howdeedo and can't even find some of my CD's to re-start.
This year, I wanted to improve my photographic skills. I replaced my dodgy old camera with the new Nikon Coolpix d360. I dithered between getting a digital SLR and a regular digital camera and opted for cheap(er) and portable. It's an awesome little camera, with a lot of options for customisation beyond its point and shoot capabilities. Thing is, I've forgotten how to use a camera properly. I learnt with my Dad's fancy SLR about 20 years ago, but since getting a point and shoot in the mid-90's, haven't given it much thought. So I got "Digital Photography" by Jim Miotke. It's in simple enough language that I'm not getting bored and it has exercises to improve your skills. (It's for both point and shoots and digital SLR's).
Tonight, I made a mini light box. I've been sitting on this information for about a year and finally got motivated to make one. It's incredibly simple and fast. The effects are amazing: I made mine much smaller than suggested for the minimum sizes and I need some more side lights. If you do try to make it, leave a good 2" on the edges you cut. It leaves the box more stable and easier to tape the tissue paper.
I have a lot of new aspirations for this year, but this is the new skill set I'm building. One of my aspirations is to spend less empty time on the computer, so I'm planning to make my computer time more productive, ergo re-starting the blog.
Happy New Year!
Posted by touran at 7:31 PM 2 comments: I bought this "harajuku in London" thermal knit from The Fabric Fairy, after I saw Stacy's super cute thermal top from a sister print.  Off to Burda I went to find the right pattern.  I don't remember paying any attention to this pattern when I first saw the January '07 issue of Burda, but it looked perfect for a fun little top. I made a size 42 and the fit is almost perfect, just a touch loose around the waist.  The shoulders are gathered with sewn over elastic thread in 5 rows.  I opted to use clear elastic in 4 rows to get the same effect.  This creates a faux sweetheart neck, which is flirty, but not too low.
The hardest part was the front band and underlap.  I read and re-read it about ten times, before I got it. The front part is faced with interfaced self fabric. The back part has a flap sewn to the cut line.
Then the whole neckline is finished with binding.  It came out a lot nicer than I expected with my fabric.
I used donut shaped snap fronts as I didn't have any with a good color match and it worked perfectly.  I'll show the snaps and tools in a later post.
The sleeves have a high arch shape, but I finger eased them very easily.  Everything, in fact, went together very smoothly, bar two little issues.
First, for a slouchy top, as they've styled it, it's actually a little short.  It's the perfect length for a T, but I should have remembered to add another inch or two for more cohesive look.
Second, the front overlap wants to pull open.  I thought this was because of my bust, but even on the mannequin, it pulls open.  I imagine pulling  the binding a little tighter on the neckline (between the snap bands and the gathering) would take care of this, by making the neckline hug the body.  I'm going to just hand sew the snap bands together, since they're not necessary to take the top off or put it on.
This is a great pattern to pull out of the archives.
Posted by touran at 7:28 PM 3 comments: This was love at first sight.  The pattern is very similar to one from Phildar, which has a reverse stockinette base instead of stockinette.   IK made theirs in a tweed yarn, with a lot of ease.  It was cute but kind of slouchy and frumpy.  So, I made changes:
yarn - yummy, tone-on-tone Malabrigo
neckline - lowered by 2" and the ribbing is now the same width as at the body hem (1.75")
ease - 0" ease.  I should have had more negative ease, but my swatch lied.  (All my swatches lie.  I just make them now so I know what won't happen in my knitting!  Rat Bastards!)
vine pattern - I moved my from left to right of the front (accidentally).
vine pattern 2 - I repeated the lovely leaves on the left sleeve and it's just gorgeous.
It's the first time I've knit clothing with Malabrigo and it really is dreamy stuff.  It felt so good, I didn't want to put it down, even during the stockinette stitch.  All in all, it took 4.25 balls, so it's a very economical sweater too.
I knew that Malabrigo grows with blocking.  Oh, but how it grew.  It went from size 41" bust to 45" bust and grew about 5" in length.  It was ghastly.  I had two choices: cut it down to the right size and re-sew it (on a sewing machine) or shrink it in the dryer.  Given that slighly felted wool is easier to cut and sew, I tried the dryer first.  Five minutes in one minute increments and it's back to its original size.  It's not even felted.  The stitches and vine pattern are as distinct as before.
I'm so happy with this.  I have a hard time finishing big projects and I'm chuffed with myself over this.  I just wish it would snow one more time so I can wear it.  It's just too hot right now for a wool sweater, even such a pretty one.
Posted by touran at 5:46 PM 5 comments:

I have more commitments than time, so I'm trying to scale back some of my project ambitions.
These are two poly/lycra knits waiting to be made up into Vogue 8553, with the plain black as the trim.  I'm hoping to use this for spring, since the poly will be really uncomfortable in the Colorado summers.  If it still fits right, I can use it later in the fall. This next one is a thermal knit from The Fabric Fairy, recommended by Stacysews.  I had to dig through my Burda WOF stash to come up with something just right. This is from January 2007 - 109.  Isn't it adorable?  I love the gathering on the shoulders, to give it a sweetheart neckline.  Instead of zigzagging over elastic, I'll sew over invisible elastic bands to get the gathers.  I always found the way suggested in Burda such a bear.  In 2o years, I haven't been able to do without tears and disappointment. I love this wool jersey.  It's a panel print of orange giraffes outlined in raised gold.  It's so funny.  I had to get a piece of another black jersey for the sleeves and used that for the neck binding, to tie the two shades of black together.
I think it works.  Because of the length of the panel, I made this into a tunic, the hem just skimming the top of my thighs.  Anthropologie says tunics are in this season, so who I am to argue? I made a straight 44.  With the gathers on the front, I didn't even need to do a full bust adjustment.  Still, I'm losing weight (an ounce here, an ounce there), so the shoulders and decolletage are a little loose.  I think I'll have to start cutting a 42 at the top. And believe me, I'm not complaining. This is the first version I made from cotton jersey - a soft nightgown for Christmas.  I used a picot edge elastic for the neckline and much deeper hems.  Is it too mumsy?  I am Mom, so that's not too bad sometimes.
I think it'll be loverly in a knit flannel for winter time.  I feel my hair greying as I type. Patternreview:
On a cost cutting urge, I didn't renew my FoPR membership last January.  I haven't been sewing much this past year and I spend most of my time on Ravelry.  But I signed up again.  It's actually a really good deal, and now I don't go to my local sewing studio, it really is my only sewing community.
I just wish the message boards had Rav's agree/disagree/love.... options and more variety.  This girl is super spoiled by the splendors of Ravelry. 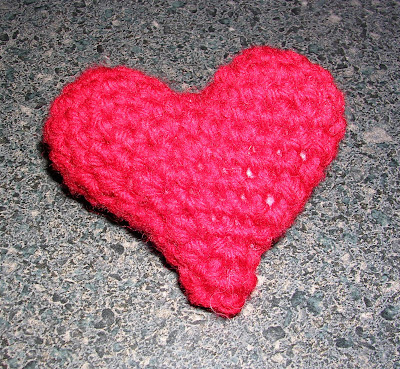 Pattern: Corazoncitos Amigurumi Hearts (On Ravelry)
Yarn: Cascade 220
Time: 30 minutes
I have a new obsession: amigurumi!  I know I'm late to the party, but this is the kind of crochet I can get into.
This was a gift for my son and has a safety pin on the back, so he can wear it. 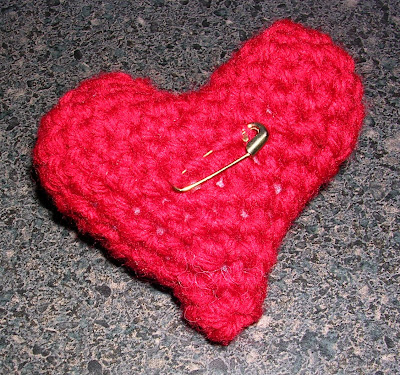 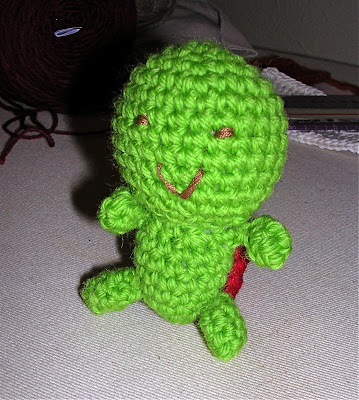 Pattern: Tiny Turtle (On Ravelry)
Yarn: Cascade 220
Time: 40 mins
Isn't he adorable?  It's really addictive, even without recipients in mind.  Of course, if you know any kids, real or eternal, you even have a good excuse.
The author, Ana Paula Rimoli, has an etsy store, and patterns for zodiac amigurumi in the latest knit1.  And hers is just the tip of the iceberg.  Check out the links at the end of the Wiki entry for the topic.
Posted by touran at 9:28 PM No comments: